Home Events Optimal control of quadrotors on the matrix Lie group of double direct isomet...
Back to activities
iCalendar 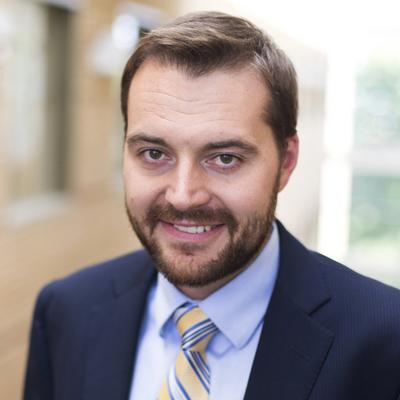 This talk considers optimal control of a quadrotor unmanned aerial vehicles (UAV). The state of a quadrotor UAV is represented as an element of the matrix Lie group of double direct isometries, SE_2(3). The nonlinear system is linearized using a left-invariant error about a reference trajectory, leading to an optimal gain sequence that can be calculated offline. The reference trajectory is calculated using the differentially flat properties of the quadrotor. Monte-Carlo simulations demonstrate robustness of the proposed control scheme to parametric uncertainty, state-estimation error, and initial error. Additionally, when compared to a controller that uses a conventional error definition, the proposed controller demonstrates better performance when initial errors are large. This work was done in collaboration with Mitchell R. Cohen and Khairi Abdulrahim.

Bio: James Richard Forbes received his B.A.Sc. in Mechanical Engineering (Honours, Co-op) from the University of Waterloo in 2006. James was awarded his M.A.Sc and Ph.D. degrees in Aerospace Science and Engineering from the University of Toronto Institute for Aerospace Studies in 2008 and 2011, respectively. James is currently an Associate Professor within the Department of Mechanical Engineering at McGill University. James is an Associate Member of the Centre for Intelligent Machines (CIM), and a Member of the Group for Research in Decision Analysis (GERAD). James is the recipient of a William Dawson Scholar award. James was awarded the McGill Associate for Mechanical Engineering (MAME) Professor of the Year Award in 2016, and the Engineering Class of 1944 Outstanding Teaching Award in 2018. James is head of the Dynamics, Estimation, & Control of Aerospace & Robotic (DEACR) systems group (https://www.decar.ca/).