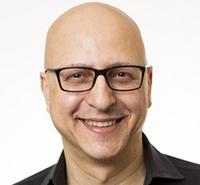 In this talk, we reexamine feedback synthesis through the lens of first order methods and data-guided control. Control synthesis has historically been approached via parameterization of certificates for robustness and performance. In the seminar, I will first discuss how first order methods facilitate a streamlined formalism to control synthesis. I will then examine how such methods also open up a new way of looking at some old and new problems in control. These problems include data-guided control, structured synthesis, and indefinite least squares optimal control. Lastly, I will discuss various topological and geometric properties of the feasible sets of the corresponding optimization problems, as well as some of their algorithmic implications.

Biography: Mehran Mesbahi is the J. Ray Bowen Endowed Professor of Aeronautics and Astronautics, Adjunct Professor of Electrical and Computer Engineering and Mathematics, and Executive Director of Joint Center for Aerospace Technology Innovation at the University of Washington. He is a Fellow of IEEE and recipient of NASA Space Act Award, University of Washington Distinguished Teaching Award, and University of Washington College of Engineering Innovator Award. He is the co-author of the book “Graph Theoretic Methods in Multiagent Networks” published by Princeton University Press. His research interests are distributed and networked aerospace systems, systems and control theory, and learning.