Discrete choice models attempt to predict what products individuals will choose (or buy), as a function of what alternatives (or products) are offered to them. These models are studied in different fields such as marketing, economic theory, mathematical psychology, and operations research. In this work, we propose a new discrete choice model that generalizes the random utility model (RUM). We show that this model, which we called the Generalized Stochastic Preference (GSP), can explain several controlled choice experiments carried out since 1980's that can't be modeled by any choice model based on random utility. In many of these experiments, individuals experience a phenomenon called the Decoy Effect: the probability of choosing a particular product increases when a similar, but inferior product is added to the choice set. An appealing feature of the GSP is that it is non-parametric and therefore it has very high flexibility. The model has also a simple description and interpretation: it builds upon the well known representation of RUM as a stochastic preference and allows the additional of new consumer types that can be interpreted as non-rational. 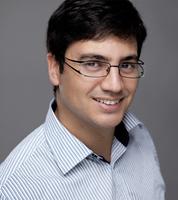